The Games You Want to Play…Blood Rage 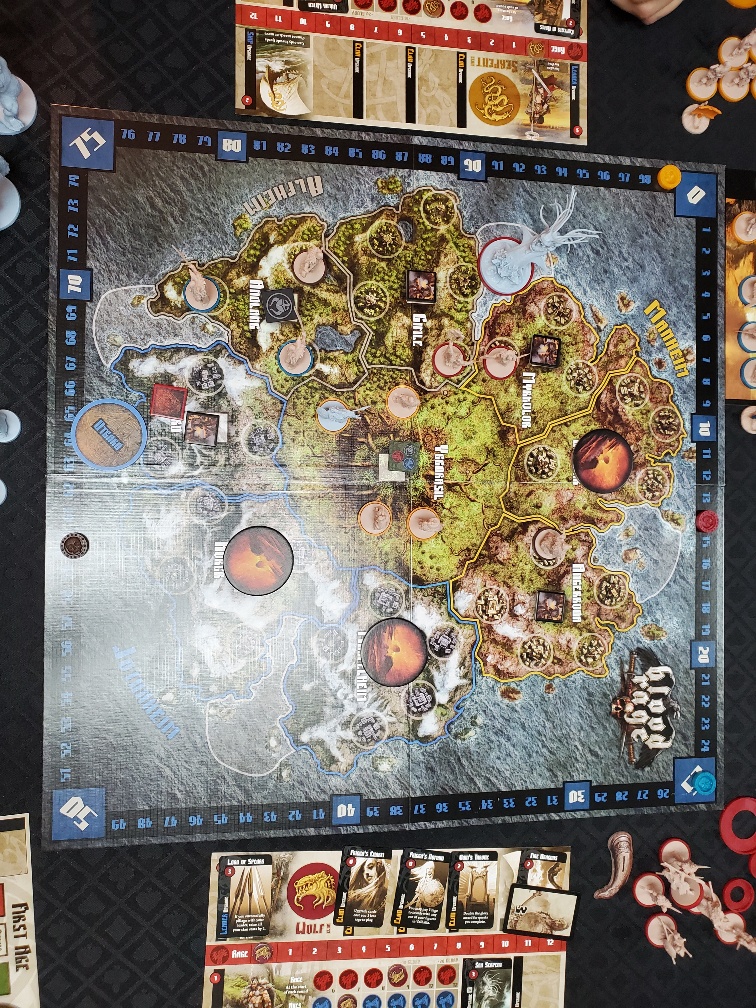 It is the end of the world! Ragnarok is upon us! Four brave clans of Vikings; Wolf (Scott), Serpent (Tim), Bear (Chuck), and Raven (Doug); do not fear the end, only failing to enter Valhalla! This is a quick-playing, fun game, with very nice miniatures (see the attached picture of the monsters – Trolls, Sea Monsters, Dwarves, Witches, etc.). There are three Ages and each Age starts with card drafting to build your hand (eight cards are dealt to each player, you pick one, pass the remainder to the player on your left, repeat until everyone has six cards).

The mechanics are fairly straightforward, but there are a number of cards and it can take a moment to figure out how to play well. We spent the 1st Age struggling to make sense of what worked and Scott and Tim seemed the only ones of us to have an actual strategy out of the gate – Scott improved the abilities of his clan with the special clan cards, which we discovered are extremely powerful, and Tim improved the quality of his Warriors and Leader). Having a plan actually works and they jumped out to an early lead with Chuck and Doug following (Chuck and Doug were having Brass: Birmingham flashbacks). In the 2nd Age, Doug became very focused on building his Rage level. Raging against the dying of the light is what lets you take actions. So, the more Viking Rage you can summon, the more you can do. Doug also worked on my HR department (Horns), which allows you to deploy more warriors and monsters. Near the end of the 2nd Age, a titanic battle involving all of the clans occurred in Yggorasil (a province at the center of the board that is accessible from every other province). Many brave warriors entered Valhalla that day!

In the 3rd Age, since Doug was so far behind, that his goal was more Glory (VP). So, he selected cards that could drive his score higher through Quests (a way to earn lots of Glory by achieving certain goals during an Age). That can be risky, since it leaves you vulnerable to losing battles and does not allow you strengthen your warriors or clan. However, he addressed that by selecting two Quest cards that were dependent on my having more warriors in Valhalla (so the more he lost, the better – up to a point) and using his greater numbers (thanks to his quality HR recruiting) to try to dominate just a province or two to prevent others from effectively challenging him. Also, Doug focused on reaching legendary status in two of the abilities (Rage and Horns – he did not work on Axes, since that increases the amount of Glory you earn for victory in battle and he was not going to see much of that).

Doug managed to come from behind for the win. Scott came in second, Tim third, and Chuck fourth. Doug’s reliance on Quests in that last age and reaching legendary status in both Rage and Horns are what pushed him a few points ahead of Scott at the end.