The Games You Want to Play…Suburbia

Five cities competed to be the most populous city in America during our two games of Suburbia: Collector’s Edition this month – New York / Yellow (Chuck), Los Angeles / Purple (Doug), Chicago / Black (Peter), Washington, DC / Red (Scott G.), and Orlando / Blue (Tim). The game is designed by Ted Alspach and published by Bezier Games. I had not really heard much about the game, but saw it in a flea market-type sale at a friendly local game store. As a fan of city building themes in general (an old Sim City player on the computer), I decided to buy it on something of a whim. A summary of gameplay follows the introduction to the game.

Players start with a small town (a Suburb – residential, Community Park – civic, and Heavy Factory – industrial) and work to build a successful city through a combination of intrinsic growth and a high reputation that draws more people to your city. You must balance your income and your reputation as you grow your population (total population equals your victory points). However, the bigger you get, the more expensive to run your city becomes to run and you begin to lose that small town charm and become less attractive to prospective residents (dropping your reputation, which is one way you can gain population – we surmised traffic, taxes, etc. were factors in this). This is represented by dropping your net income and reputation one slot on your city track each time you pass over the “Red Roof Inns” as you move up the population track (though there are some city tiles that help mitigate that).

Each player selects a unique, private goal out of two that have been randomly dealt and then there are public goals equal to the number of players that all can compete to earn. Being the sole player to achieve a goal earns you bonus population (goals are the trendy thing). There are no ties allowed in these goals – even the private ones (but other players cannot win your private goal, they can only prevent you from gaining the points).

These tiles vary from suburbs to apartments to parking lots to schools to airports to factories to slaughterhouses. They can impact your Income and your Reputation and your cash for the short-term and long-term. Also, based on the tile, you can score for where they are placed in your city (based on the adjacent tiles) or what is in your city or another city. For example, parking lots increase your Income +1 when purchase and +1 for each adjacent civic or commercial tile and airports (based on the type) can increase Income and/or Reputation when there are more airports out there to visit. People shy away from slaughterhouses, so they hurt your Reputation, but enjoy a great museum, which increases your Reputation.

As noted above, we had five players and stuck with our cities for both games – New York / Yellow (Chuck), Los Angeles / Purple (Doug), Chicago / Black (Peter), Washington, DC / Red (Scott G.), and Orlando / Blue (Tim). This was the first time playing for most of us and only the 2nd or 3rd time for the most experienced among us. We played two games of Suburbia, playing a hodge-podge of expansions the first time (including Borders) and then being a little more focused with the expansion tiles for the second game. We discovered (and this is mentioned in the rules) that it is best to carefully select the expansions that you want to include and be sure to include the appropriate goals, etc. 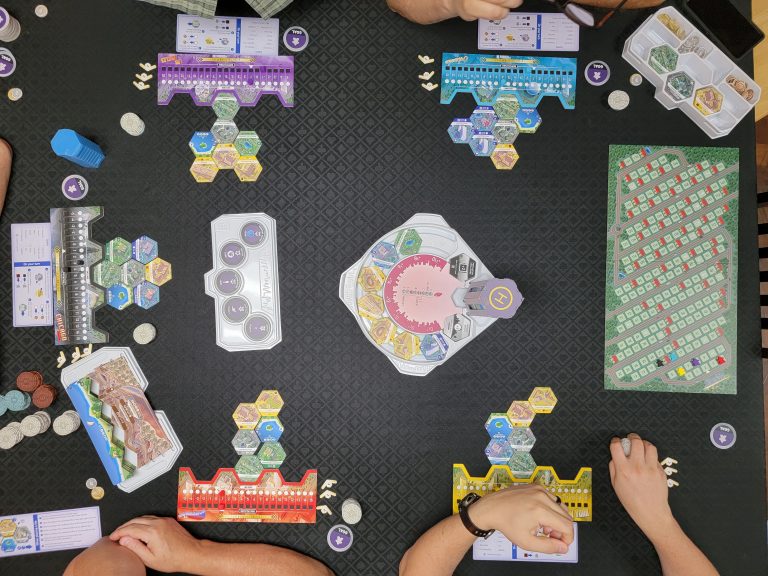 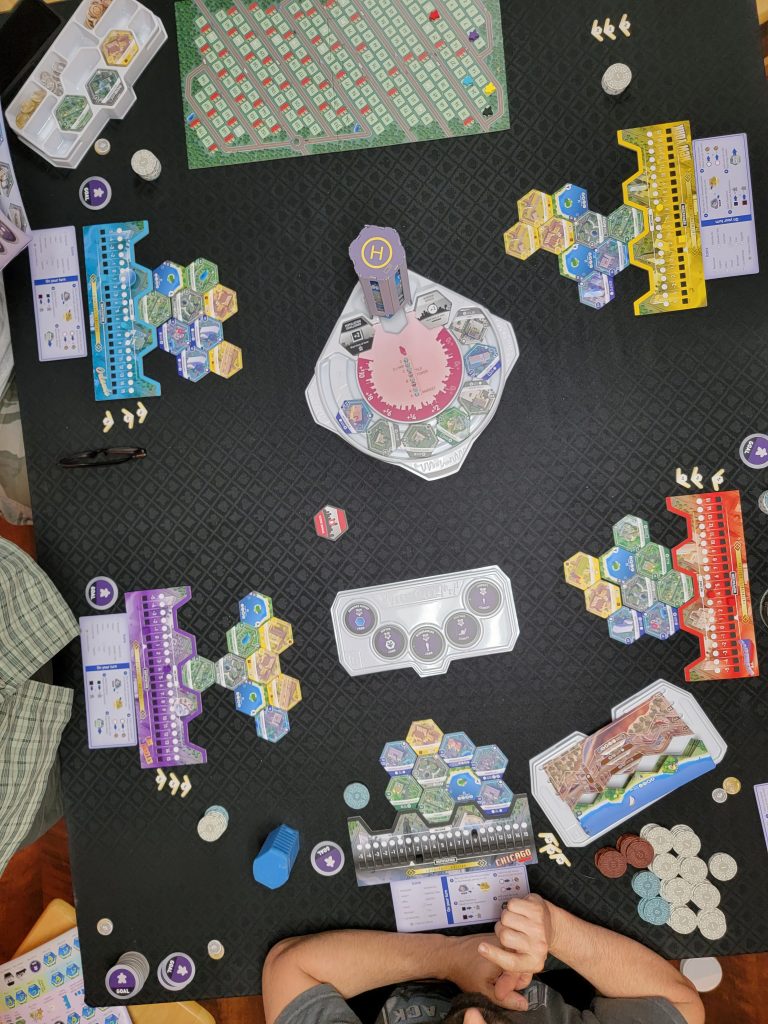 Though the first game was a bit of a mish-mash of expansion tiles and the public goals were not a perfect fit for the hexes that were in play, there were enough goals that tied to the tiles for the game to work: Fewest Commercial (“Layabout”), fewest Investment Markers (“Employer”), most Suburbia, Inc. expansion tiles “Entrepreneur”, most Residential (“Builder”), and most Lakes (“Aquatic Engineer”).

NYC started with a combination of industrial and commercial buildings, LA focused more on industrial (including a slaughterhouse), Chicago went more commercial (but managed to grab the Homeowner’s Association, which is a solid money generator as other players add residential space), DC advanced with a mixture of residential and industrial (though managing to pick-up the HOA, also), and Orlando went heavily commercial. 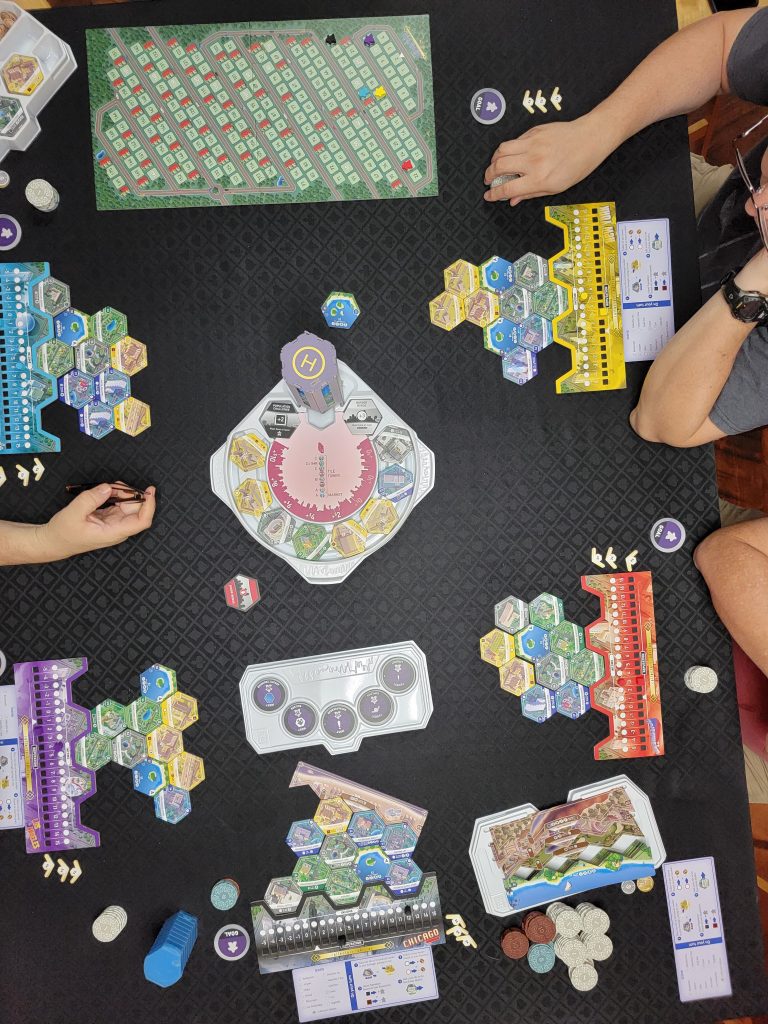 It wasn’t long before Chicago hit the Beach (a border) on Lake Michigan. It continued to expand its commercial sector, including Waterfront Realty (another moneymaker), and took an early lead. Orlando expanded up to another border, National Park, and began to diversify. LA was a combination of residential and industrial, with just a bit of commercial. DC had a strong residential base and was diversified across industrial, residential, and civic tiles. NYC became the transportation hub of the country with a massive investment in airports. 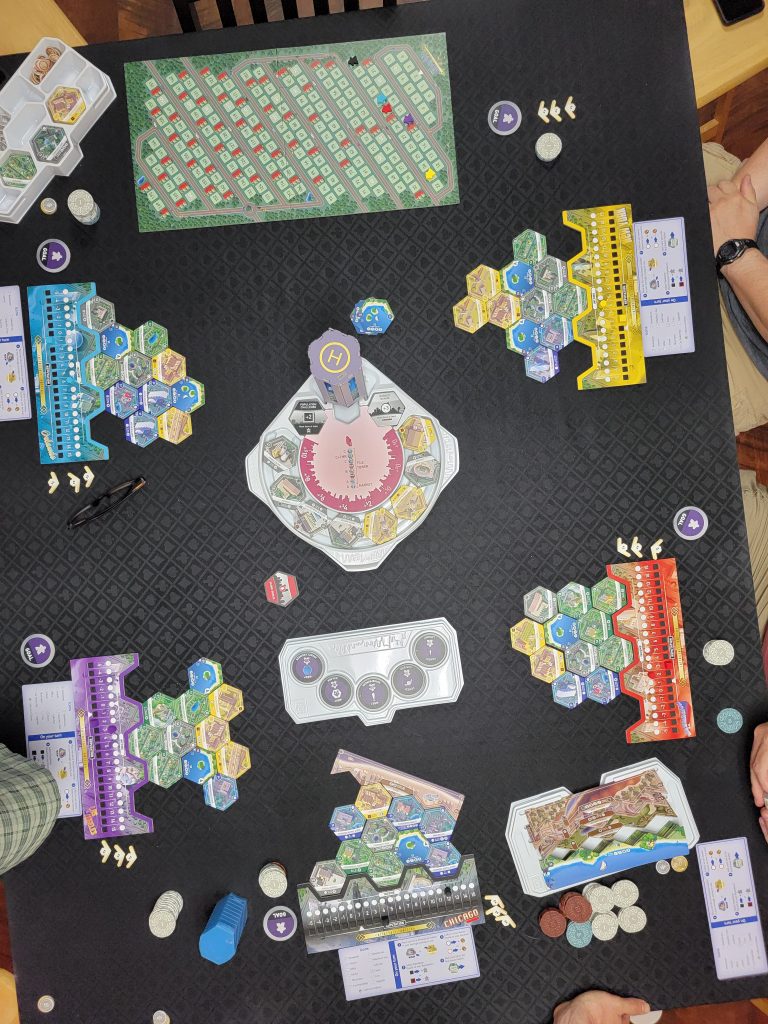 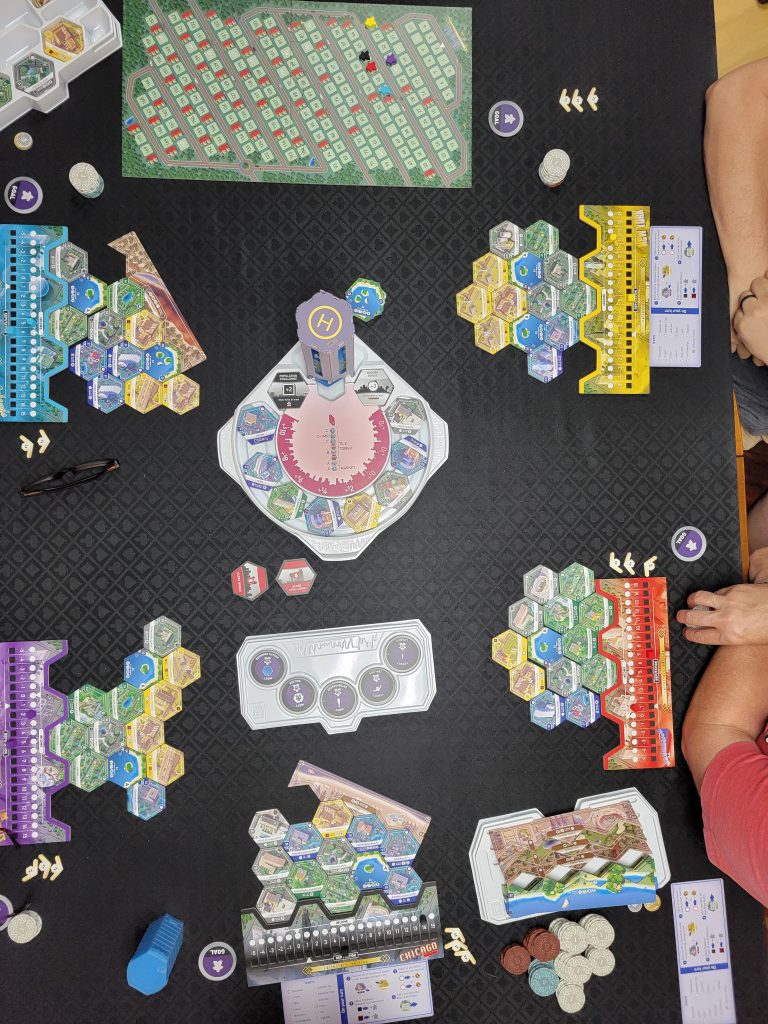 Within a couple turns, DC added Railroad Tracks (a border) and had further expanded its residential areas. It had an Income and a Reputation of 6. Chicago went heavily into civic tiles and was well ahead of the other cities in Income (14) with a good Reputation (4). NYC added some more civic buildings and maintained a strong Income (9) and Reputation (6). Orlando continued its reliance on commercial buildings and continued with a strong Income (10). LA struggled with net Income (0), though it had a good reputation (5). 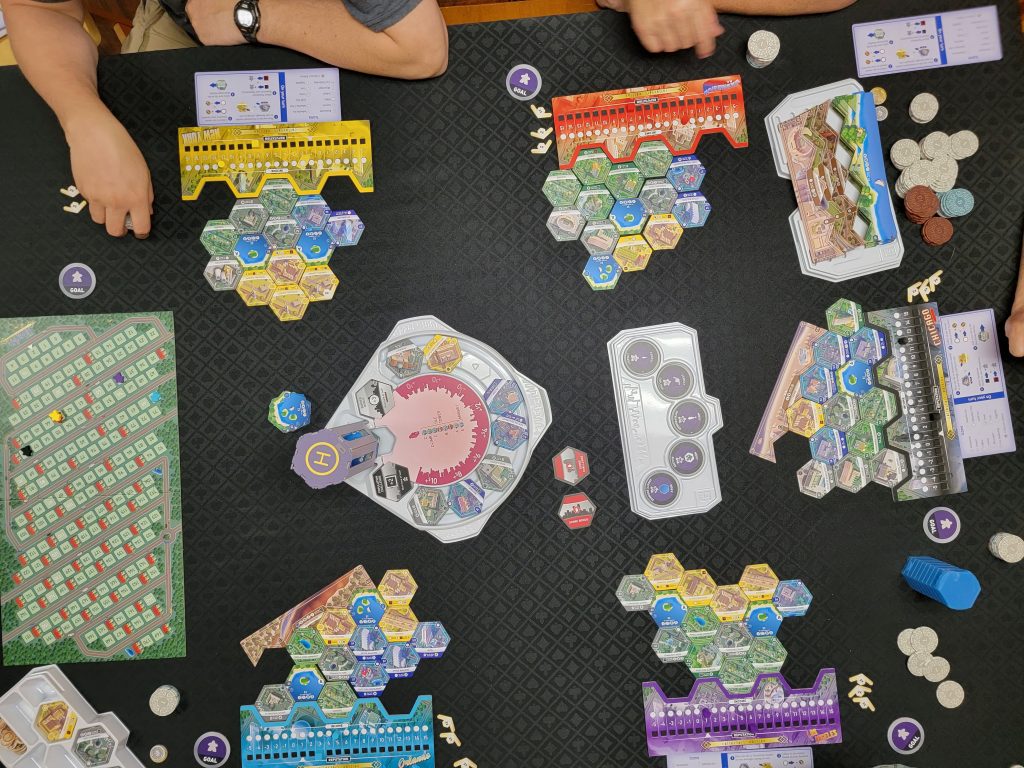 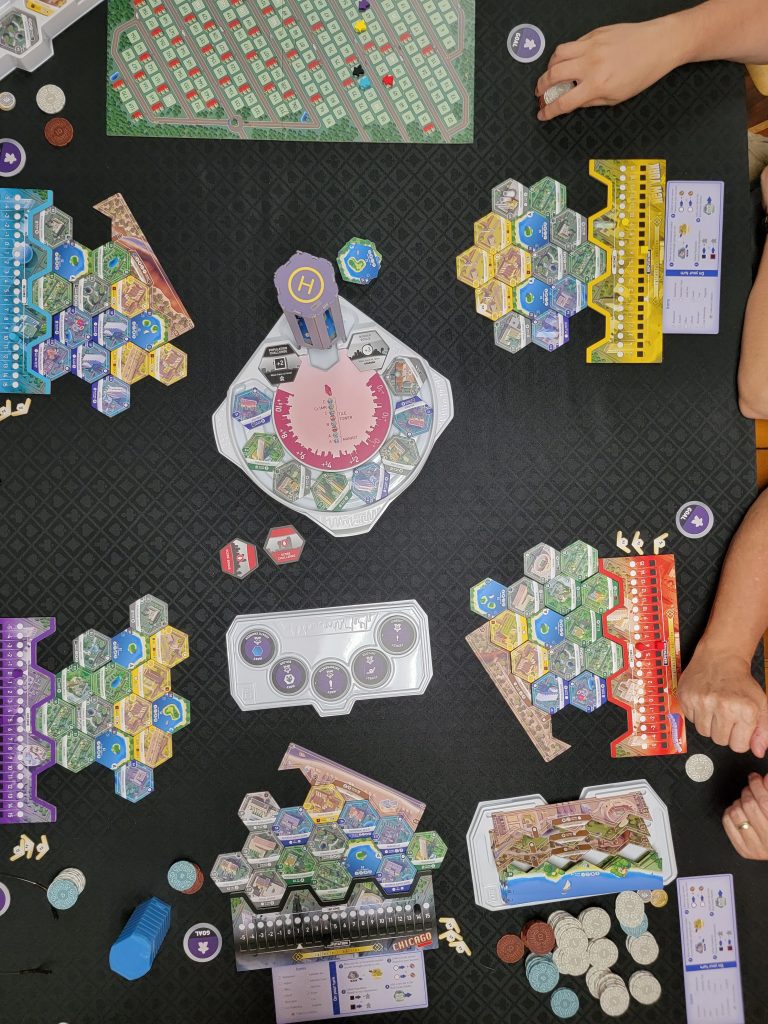 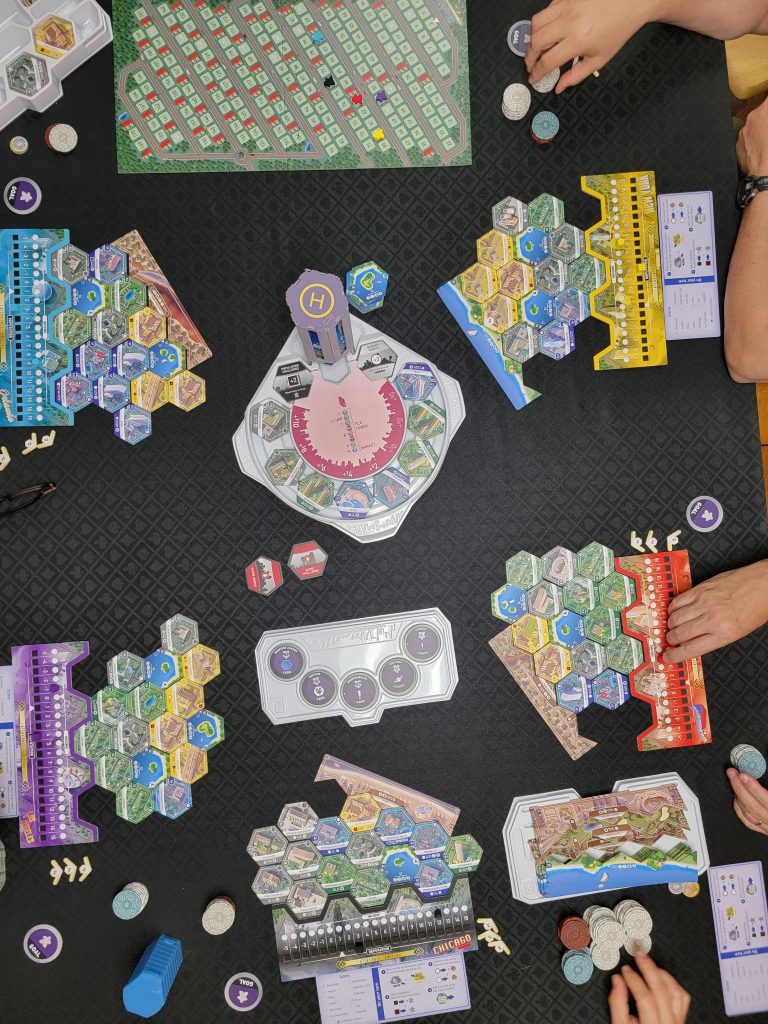 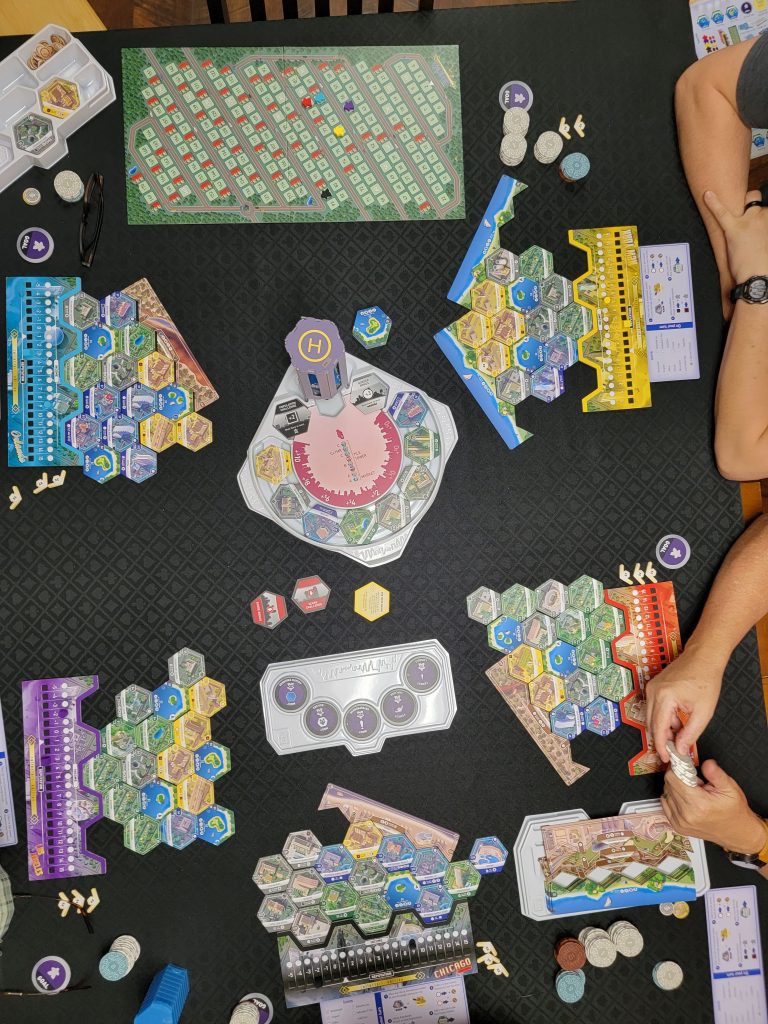 Congratulations to Chicago / Black (Peter) on its victory with a population of 116! Washington, D.C. / Red (Scott G.) finished with 101, Orlando / Blue (Tim) with 84, New York / Yellow (Chuck) with 83, and Los Angeles / Purple (Doug) with 61. Peter did a great job of maximizing his city’s Income and cash, always having enough to money to buy the tiles he wanted.amet, consectetur adipiscing elit. Ut elit tellus, luctus nec ullamcorper mattis, pulvinar dapibus leo. 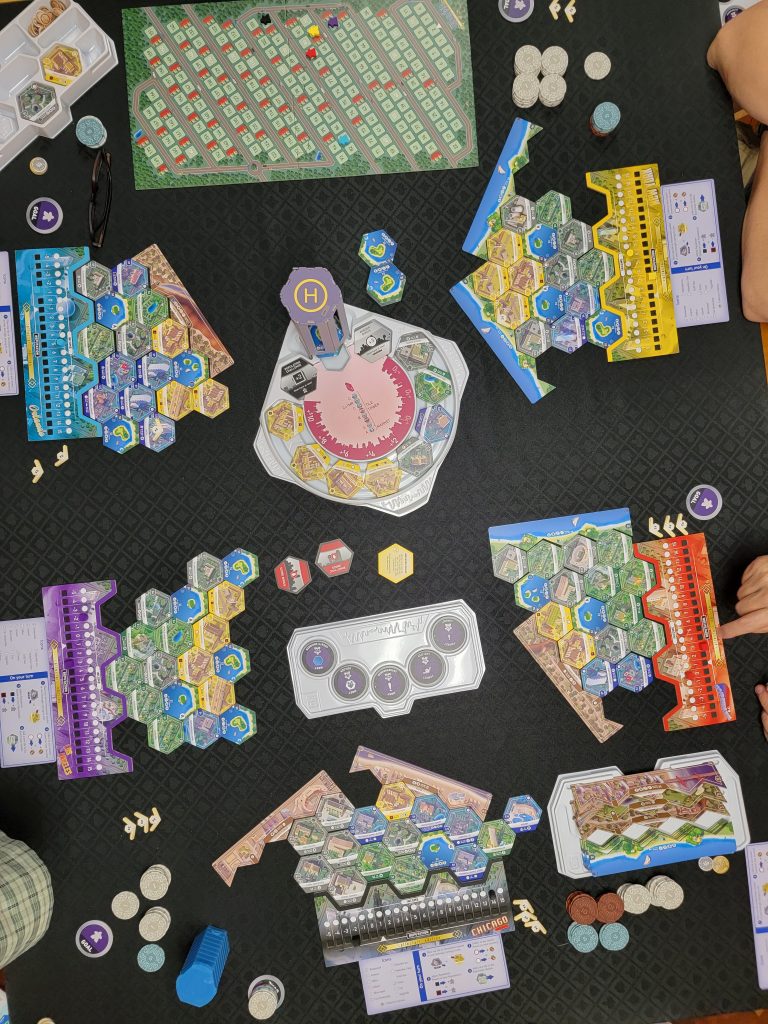 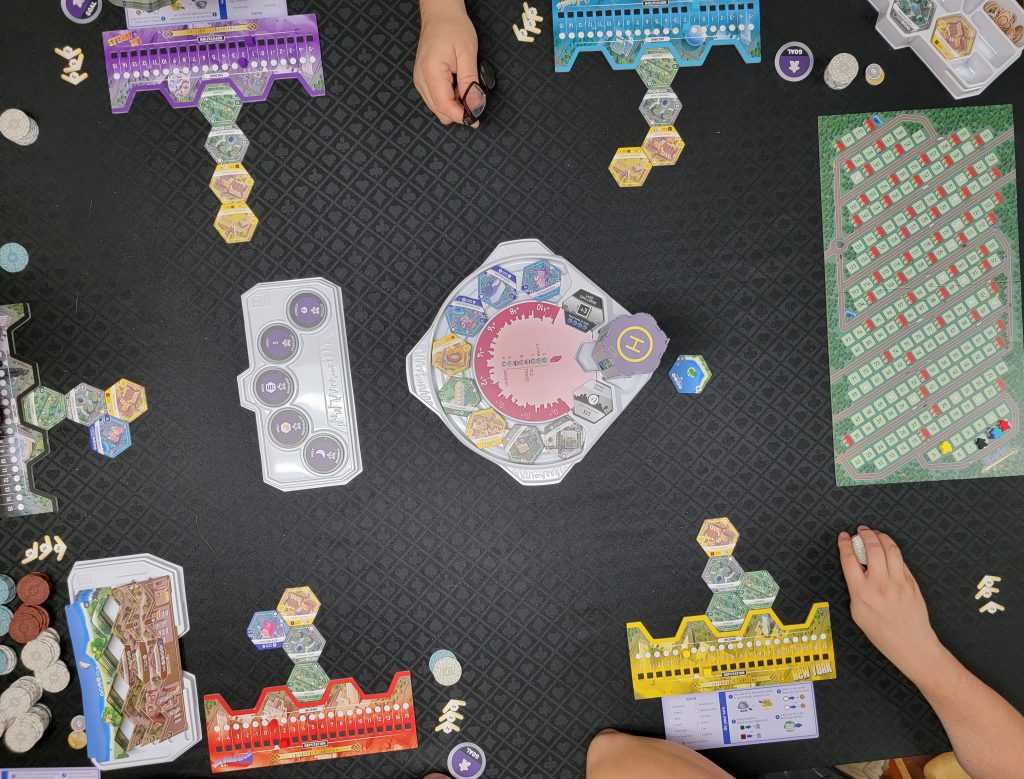 New York / Yellow (Chuck) went with a heavily residential approach with a number of high-end residences, a couple of industrial (including an airport), and a couple commercial. The city had a Lake border and a couple other lakes, but did not add any civic spaces beyond the original Community Park. Income at the end of the game was -5 and Reputation was a 1. The additional investment in its Homeowner’s Association (adding an Investment Marker) and its other wealthy areas allowed the city to pocket a large amount of money, despite where its Income ended.

Los Angeles / Purple (Doug) was heavily residential with a larger number of Suburbs, also, but had a large industrial sector (including a couple airports) and a core of civic spaces – though no commercial areas. It had invested heavily in its Stadium (adding an Investment Marker) and was bordered by a Lake. The city ended the game with an Income of 4 and a Reputation of 7. With a relatively weak Income for most of the game, it focused on spreading its residential base with the less costly Suburbs that benefited from its Elementary School and Stadium.

Chicago / Black (Peter) turned out to be a very “outdoorsy” city, bordered by Mountains, a National Forest, and a Lake. The city had almost no residential area (having only the single Suburb with which it started the game) and heavy commercial and industrial uses. It ended the game with an Income of -1 but it Reputations was stellar at 15!

Washington, DC / Red (Scott G.) was a city with strong commercial influence, a relatively light residential  and industrial presence, and a number of lakes. It was bordered on one side by Fort Antonio, a Lake on another, and a Radioactive Waste Site on another. Income ended the game at 2 and Reputation at 6.

Orlando / Blue (Tim) was heavily industrialized city with 7 industrial hexes. It had some residential and commercial spaces, as well as a Pointy Cathedral. Its massive industrial area bordered a Lake. The city ended the game with an Income of 10 and a Reputation of 6.

The public goals went to the following cities: most Suburbia Nightlife (+15) “Insomniac” – None, most Industrial (+15) “Industrialist” – Orlando, most Commercial (+10) “Developer” – Chicago, least Money (+10) “Spendthrift” – Chicago (despite having significant cash during the game), and fewest Commercial (+10) “Socialist” – Los Angeles. Three of the cities managed to claim private goals: New York – Most Money “Billionaire” (+10); Los Angeles – most Contiguous Civic Tiles “Public Official” (+15); and Orlando – most Restaurants (+15). Chicago –most Lakes (+20) and Washington DC – highest Reputation “Luminary” (+10) did not claim theirs.

Congratulations to Los Angeles for winning the 2nd Game with a population of 108! New York ended the game with 106, Chicago with 94, Orlando with 78, and Washington, D.C. with 67. Although LA struggled with Income during the game, it was able to expand with the basic Suburb tiles to take advantage of the population growth provided by the city’s Civic tiles to push the city’s population to pull slightly ahead of New York.

Scroll through the Turn-by-Turn photos below…