The Games You Want to Play…The Battle of Trafalgar (Miniatures) 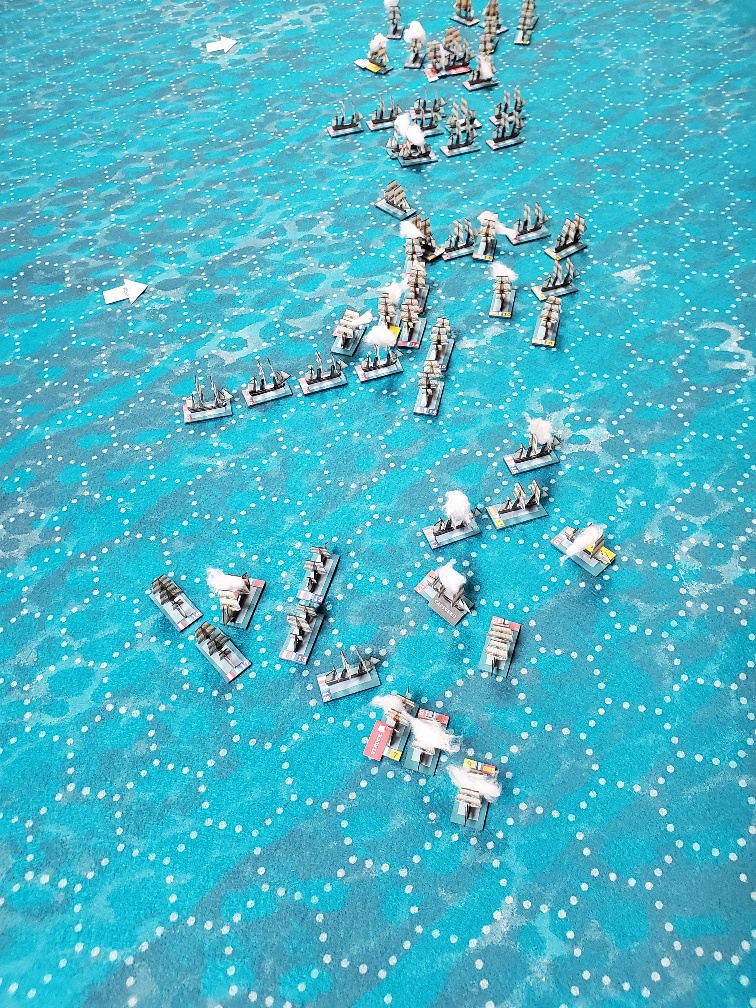 We played the historic Battle of Trafalgar from the Napoleonic Wars using miniatures some time back, but I never posted anything about it, so I thought I would share some highlights from the battle…

The Battle of Trafalgar occurred in 1805 off the southwest coast of Spain between the Franco-Spanish allied fleet and the British fleet. Though having fewer ships of the line, the British sailors were more experienced and better trained and the fleet was better manned, supplied, and led (many of the best French naval officers had been executed or had fled during the French Revolution).

The Franco-Spanish fleet is pushing north and upwind along the Iberian coast when the British descend upon them. The Combined Fleet is in two groups and the British attached from the west, hitting each group separately, almost forming two, distinct battles. The northern action seems to have become a dogfight with the lines breaking and ships grouping into small actions. The southern action, despite the British breaking into the Combined lines, maintained a more ordered line on both sides for a while, though the Spanish and French have now become separated during the British attack. The two battles have grown closer as the southern action creeps northward slowly and the forces in the northern action swirl around each other.

The British quality shined through as they approached the Combined Fleet and their shots began to hit at long range. However, when the British hit the big ships of the Spanish in the southern group, the Spanish seemed to find their footing and began to pound on the British ships. Both sides’ Ships-of-the-Line tore into each other with abandon. The action has been fierce on both ends. Out of the 60 some-odd ships in the battle, over a third are seriously damaged and a sixth are sunk or out of the action (having struck or fleeing). More Franco-Spanish ships appear to be damaged, but it is a near-run thing and the final decision is still up in the air.

Unfortunately, we did not have enough sailors Thursday to finish the Battle of Trafalgar. However, before picking up the game to play Though the Ages (see a quick note below), we took a moment to see where the battle was…

Of the 33 ships in the Franco-Spanish Combined Fleet, 7 were out of the battle (21%) – 4 had struck, 1 had exploded, 1 was a drifting wreck, and 1 was fleeing. All four of their Ships-of-the-Line were still in the battle, but the flagship of the Leeward Division, the Principe de Asturias was chewed up and would only be able to take 3 more hits. Two other ships were within 3 hits and one ship within 1 hit of being knocked of the battle.

Of the 27 ships in the British Fleet, 6 were out of the battle (22%) – 2 had struck, 2 were captured, and 2 were fleeing. They had two of their seven Ships-of-the-Line knocked out of the battle, the Prince – 98 guns – and the Victory (the Fleet’s flagship – 100 guns, which had struck). Also, the Royal Sovereign  – 100 guns – was on the verge of striking with just another hit and the Dreadnaught had three to go. Two other ships were within 3 hits and three other ships were within 2 hits of being knocked out of the battle.

Through the Ages: A New Story of Civilization is a civilization-building game built around card drafting. Players spend their actions to purchase cards from the card track – wonders, technology, leaders, governments, resource enhancement, and other cards; build structures, increase population, and raise military units among others. Political cards allow raids, wars, trade deals, opportunities to capture colonies, and other actions.

Don, Scottt G., Dominic, and I sat down for a refresher / teaching play of the game. This is a game that I enjoy playing, but it can take a couple nights to finish (especially when not having played in a while or teaching new players the game) and we did not make it more than halfway. At the time we finished, Don was leading with Scott close on his heals.