Send Us a Mail

The Games You Want to Play…1960: The Making of the President

Scott G. and Doug played 1960: The Making of the President as the Kennedy (Blue) and Nixon (Red) campaigns, respectively. We played the Z-man Games version of the game, which differs from the current version that is published by GMT Games. Scott G. did a great job of teaching Doug the game, though he had not played in some time. After a brief teach, we dove into the game and started to learn the strategy the hard (fun!) way.

The game board is a map of the United States. There is a location to place cards for campaign strategy, a turn and phase track, a location for “rest” cubes, and locations for event cards that impact the debate, election day, and prevention cards.  Each state shows its name, electoral votes, the way the state leans if there are no cubes on it on Election Day (which candidate has the “Edge”), and Candidate icons that show the number starting cubes for the candidate in each state. Additionally, the State Seal is placed on each State. The nation is divided into four regions that impact the movement of the candidates during a turn, advertising effects, and the area influenced by endorsements. There is a smaller board for the debates. 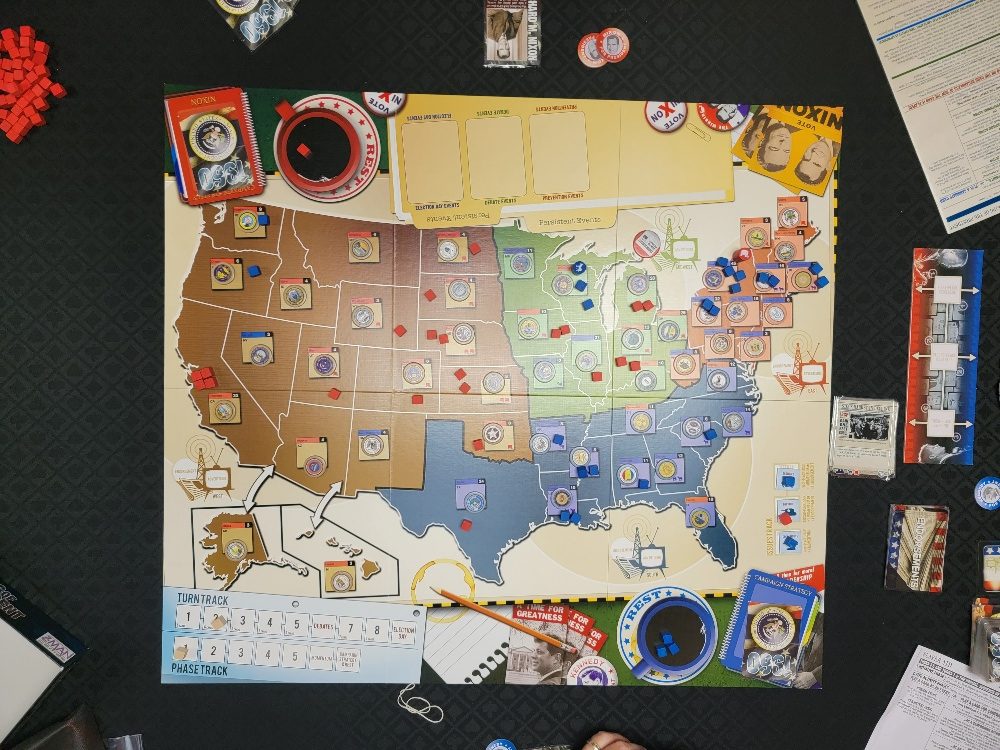 The Nixon campaign starts with its base in California and the Kennedy campaign in Massachusetts. Nixon’ campaign is strongest in the West and Kennedy’s in the East and South. The Midwest is contested.

Cubes serve many purposes in the game: a campaigns electoral strength in a state, dominance in the three issues at play (Civil Rights, Defense, and Economy), and are contributed to the Political Capital Bag from which draws are used to determine support and initiative checks.

Each player starts the game with the Candidate’s Card (it is worth 5 CP and can be played in place of an Event Card) and a hand of six Event Cards. 5 of these Event Cards are played in the 5 Activity Phases during each of the first 5 turns. The sixth card is added to a player’s campaign strategy deck in preparation for the debate (Turn 6), which will occur after the fifth turn is completed. The debate is followed by two more turns, during which the player is dealt 7 cards (though still playing only 5) and Election Day.

Cards communicate three pieces of information that are critical during a turn – Campaign Points (“CP”), Rest Cubes (cards with lower CP values usually provide more Rest Cubes, which are added to the Political Capital Bag), and an Event (which can be specifically beneficial to a particular Candidate or for either Candidate). Additionally, each card includes a Card name, an Event Bar (for Persistent Events only – Debate, Election Day, Prevention), a Candidate icon, a Debate Issue icon (which will determine the issue it impacts during the debate), a State Selector (for use on Election Day), and some historical text. 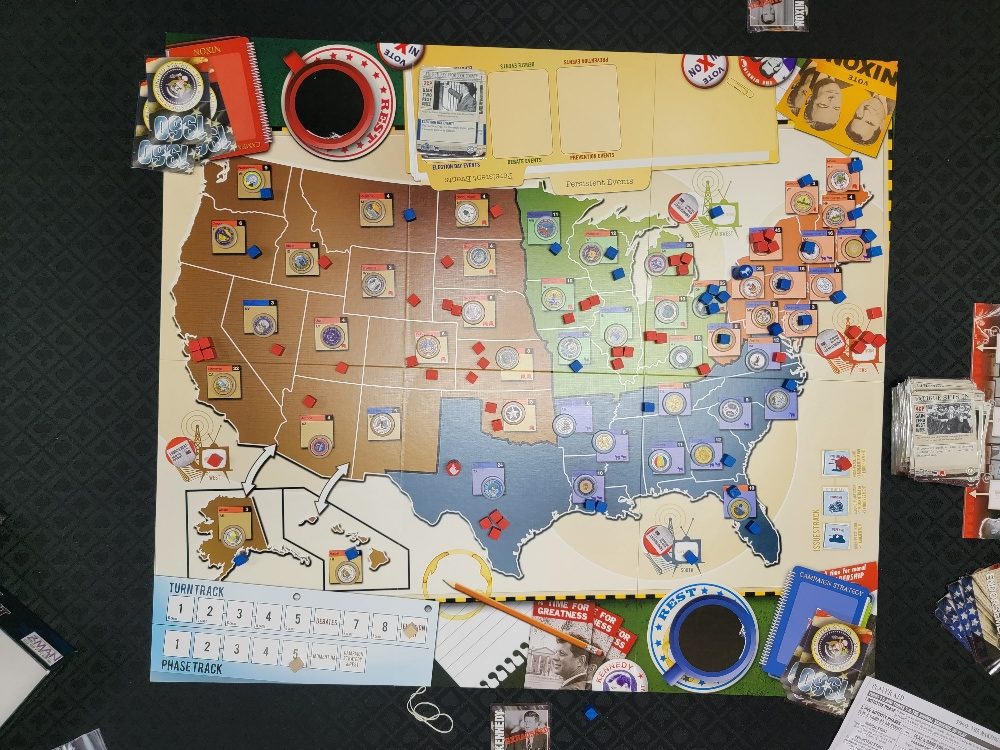 Campaign Points can be spent to campaign in a State by moving the Candidate to the State (add cubes to a State – note that it costs a CP for a Candidate to move from one region to another), advertise in Regions (cubes are added to the Region’s Advertising space), and position the Candidate on Issues (add cubes to an issue). Both Candidates’ cubes are not represented on a State. Instead, if a Candidate spends CP to campaign in a State, the opposing Candidate’s cubes are removed first and, once gone, the Candidate can place cubes on a State. If a Candidate is carrying the State (4 or more cubes) or is present in the State, each CP spent requires a Support Check. A Support Check is done by drawing a cube from the Political Capital Bag. If the cube matches the Candidate’s color, then the CP reduces the cubes of the Candidate carrying the State. This goes to the value of adding cubes to the Political Capital Bag through rest and other methods in the game – it increases the odds that Initiative and Support Checks will come out in the drawing Candidate’s favor.

Playing a card for CP is more than slapping it down. The mechanics of the game require a Candidate to consider a number of factors when determining the card to play, not just how to play the card…will the card prove more valuable during the Debate or on Election Day; does the opposing Candidate have any Momentum; will the Event be of interest to the opposing Candidate and, if so, how can the CP on the card be played to minimize the value; is it worth Preempting the Event.

We worked through the first few turns, playing CP and Events. Nixon spread his base in the West to start and tried to break into the East. However, he chose to go to New York, where Kennedy had four Support Cubes. A Candidate is considered to be “carrying” a State with four or more cubes in place. Carrying a State or being present in a State gives a Candidate’s support additional protection. The Candidates warred back and forth with the Regions tipping either way. The game does a good job of balancing between the value of using the CP or the Event and protecting the Events that the other Candidate may find value Triggering.

After the fifth turn, the Debate commences. Each Candidate takes the 5 cards from the Candidate’s Campaign Strategy deck (built from the excess card retained at the end of each turn) and prepares to play them in alternate order. The Debate Issue icon determines on which of the three Issues it can be played and the Candidate icon determines which Candidate benefits. After a Candidate has two cards on an issue, that Issue is decided. As Issues are won, the Candidate is awarded Support Cubes to be placed on States. It is important to keep in mind the icons for Candidate and Issue when deciding which card to save each turn. We did not have a good feel for that when playing and the Debate was a bit of a mess! Kennedy won the debate.

There are then two more turns before Election Day. These are played the same as the first 5 turns, but the player is dealt 7 cards rather than 6 and places 2 cards in Campaign Strategy.

When Election Day arrives, a Candidate’s media and issue support cubes are placed in the Political Capital Bag. Players then receive three Support Checks based on the States on the cards in each Campaign Strategy deck. Election Day Events that were played during the game are used. States without Support cubes for a Candidate then go to the Candidate with an Endorsement in the Region. If there is not an Endorsement in that Region, the State goes to the Candidate with the Edge in the State.

The Candidates now collect the State Seals from each State with Support. The State Seal has the State’s Electoral Votes on the back, easing the math for each Candidate.

Congratulations to Doug for his Electoral Victory! He won with 307 Electoral Votes to Scott G.’s 230 Electoral Votes. The Nixon campaign had managed to maintain its dominance in the West and a strong presence in the Midwest. Its presence in the East was almost non-existent, but it did carry New York and its 45 Electoral Votes definitively – a swing that carried the day for the Campaign by itself. Also, it won a number of the issues later in the campaign, which provided Endorsements across the country. The play of an Event late in the game had allowed Nixon to carry Texas and some other Events played by both campaigns had cleared many of the States in the South of cubes. This allowed Nixon to capture a number of States in the South on Election Day thanks to the Endorsement he held in the Region (Endorsements only work in the States where there are no cubes, so the Endorsement in other Regions had minimal impact on the Election).

We both enjoyed the game. Once you have the basics, the mechanics are straight-forward. However, the game offers numerous tactical and strategic options on the way to the Presidency. Looking forward to playing this game again.