The Games You Want to Play…The Game of Thrones 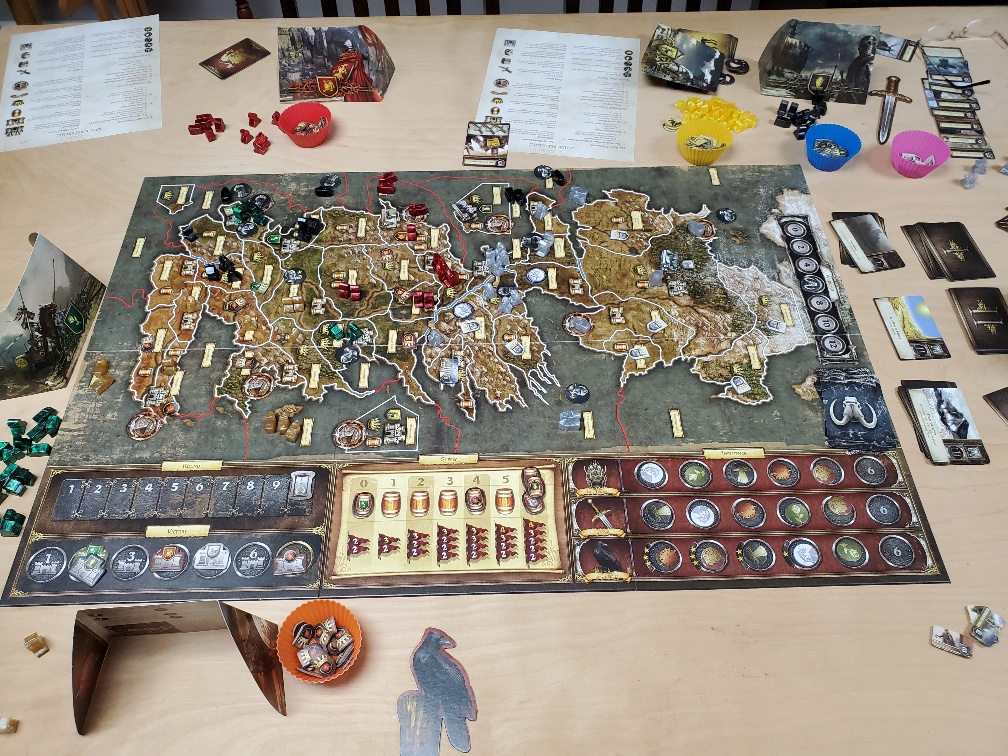 The Games of Thrones: The Board Game

We finished a 6-player Game of Thrones session this week. The Houses were as follows: Stark (Dominic), Lannister (Wil), Greyjoy (Doug), Baratheon (Jeff), Martell (Chuck), and Tyrell (Peter). The game started with the Houses securing their neighborhoods. The most action in the early rounds was probably between Greyjoy vs. Lannister and Greyjoy vs. Stark on the water. Greyjoy pushed both back to their coastlines – for the time being. Baratheon began to expand its presence on the mainland. However, Martell soon began to square off against them in the Narrow Sea and, before long, Tyrell made the jump and grabbed King’s Landing.

Before long, there was a tight group with every house except Greyjoy a contender, but no one breaking out. Baratheon was worn down by the combined efforts of Martell and Tyrell, Stark continued its push south and threatened Dragonstone from the sea, and the Lannisters fortified their central position. Greyjoy, which had been poking around the edges suddenly struck Tyrell, taking Highgarden. The Starks pushed hard against the Lannisters, but were rebuffed and the Lannisters counterattacked – pushing into the North and taking a strong lead. Tyrell reeled from additional attacks from Greyjoy and, though their House was mortally wounded, they eventually managed to drive the raiders back into the sea and retake Highgarden.

Greyjoy, having been available to the highest bidder and bouncing back and forth between backing the Starks and Lannisters, sided with the Starks in the end to prevent a sudden victory by the Lannisters. The Starks pushed south again and became a contender for the throne. In the meantime, while Tyrell was reacting to the Greyjoy raids and the Starks and Lannisters battled in the north, the Martells finished off the weakened House Baratheon and that great family’s dreams of ruling the Seven Kingdoms. With that foe vanquished, the Martells turned their full attention on the weakened Tyrell lands and other territories recently raided by the Greyjoys (that they left under-garrisoned as they over-extended themselves in their rush for more pillage and plunder), quickly capturing sufficient strongholds and castles to claim victory on the last turn.

The Martells won a complete victory and claimed the Iron Throne. The Starks held a strong position and would remain influential in the kingdom with the Lannisters nipping close at their heels. Both the Tyrells and Greyjoys found themselves at the bottom as the weakest of the five remaining houses (though the Greyjoys might argue they were having the most fun).