The Games You Want to Play…Eclipse

Of the five empires competing for galactic domination, four were non-human – the Eridani (better tech to start, but fewer resources / discs make it a challenging play) – Peter, Draco (friends of the Ancients) – Wil, Mechanema (builders – cheaper ships and more builds/upgrades per action) – Scott, and the Hydrans (techies – can research multiple techs per action) – Tim. Then, there was the Terran Alliance (average, run-of-the-mill Hoomies) – Doug.

The Eridani managed to build a solid empire. Having discovered an ancient technology that made their ships incredibly tough, they built a fleet of interceptors (the smallest ship class). Sandwiched between the Mecha and the Terran Alliance, things could have gone poorly for them, but they managed to maintain peace with the Mecha and found their other flank protected by a lack of wormhole connections with the humans.

Though between the Humans and the Hydrans, the Draco found all of their border sectors inhabited by friendly Ancients and settled in to build-up resources and tech. The Ancients helped them secure a couple of the core sectors and their early research of orbitals let them build a significant resource base behind their moat.

The Mecha got off to a strong start, building a core empire and eventually driving all the way to the Galactic Center, which they held for a good portion of the game. The massive missile ships they developed intimidated their rivals, leaving them unmolested by their three neighboring empires until later.

Forced to focus more on the outer sectors by the strong core presences of the Draco and Mecha, the Hydrans built an expanded empire of rim sectors and used their research skills to great advantage.

The Terran Alliance was less than a “stellar” example of human achievement. The one core sector they discovered was defended by an Ancient and quickly grabbed by the Draco before the humans could build-up the ships to take it. Their next move toward the Eridani ran into another Ancient. Careful placement of wormholes by the Draco and Eridani left the humans with only one way out of their galactic arm – straight through the Draco wormhole fortifications. Unable to break into the galactic core (until the last turn when they finally discovered Wormhole Generators), the Terran Alliance built an empire of rim worlds and had little impact on the game.

The real action occurred during the final round of the game. The attached photo shows the situation just prior to the great Mecha-Galactic Entente War of 42.345.

The Mecha (white), based on the overwhelming firepower of their mighty missile ships coupled with arrays of targeting computers, had maintained the peace in the galaxy and had ruled benevolently from the Galactic Center for some time. This did not sit well with the other empires, but no individual empire was able to face them. Realizing that the humans (black) – on their isolated, under-developed worlds – would be of little use, the Hydrans (blue), Draco (yellow), and Eridani (red) set out to correct the balance of power in the galaxy.

They knew that all they needed to do was survive the initial missile onslaught of the Mecha ships and then they would be like wolves among the sheep (or, as the Eridani might say, DraakkEach among the NessleWumps). The Draco and Hydrans loaded their ships with shields to thwart the Mecha’s targeting computers and the Eridani wrapped more and more armor around their quick, little interceptors in preparation for the great war of liberation to come. The disconnect from the physical plane of existence of the great Mecha emperor SctSch001 and its replacement by dGKru4 could not have come at a worst time for the peacekeepers of the galaxy.

Though there had been warnings, the Mecha had built all of the ships their industry could support and minor adjustments to reinforce vital sectors were all that could be done. As the peace-loving humans watched in horror, the Entente launched its attacks across the entire length of the Mecha’s empire with each of the three invaders focused on a primary target. The main Hydran fleet attacked the Home Sector of the Mecha, with smaller pinning attacks in other border sectors, and the Draco launched their fleet against the Galactic Center. Massive dreadnaughts and heavy cruisers poured out of the wormholes in these sectors. The Mecha’s lack of starbase technology had left them without fixed fortifications to guard these entry points. Swarms of Eridani interceptors, well…swarmed through a wormhole into a sector near the Galactic Center where a large Mecha fleet was based, preventing those ships from rushing to the defense of their fellow Mecha.

Though the Mecha missiles blasted invading cruisers from space, the heavily shielded dreadnaughts of the Draco and Hydrans shrugged aside the desperate defenses and pushed toward the Mecha ships. The first to fall was the Mecha Home Sector, causing cascading morale failures to ripple through the Mecha systems as Home Fleet was eradicated. However, hope grew anew as Mecha ships battled successfully against the Hydrans’ pinning attacks to protect the backs of the fleets guarding the Galactic Center. Elsewhere, though many were destroyed, the little flying bricks of the Eridani simply weathered the storm of missiles and pushed through to completely destroy the Mecha fleet they had targeted. Once their missiles were expended against the Draco, the main fleet of the Mecha at the Galactic Center faced certain destruction, but was able to retreat successfully thanks to those brave defenders in an adjacent sector who had repulsed a Hydran assault.

The timing of the Entente’s attack was perfect and, though a powerful Mecha fleet had survived, the Mecha would have no chance to counterattack. The end of the war found the Hydrans taking the dominant position in the galaxy. The Draco were now the second most powerful force, followed by the evenly matched Eridani and Mecha. The humans sent congratulations and condolences as appropriate, then quietly turned off the lights to avoid being noticed further by the new powers of the galaxy. How long will the Hydrans maintain their dominance? Will the Mecha find a way to restore their power? Will the Draco be able to use their control of the Galactic Center to lead the galaxy, despite the strength of the Hydrans? 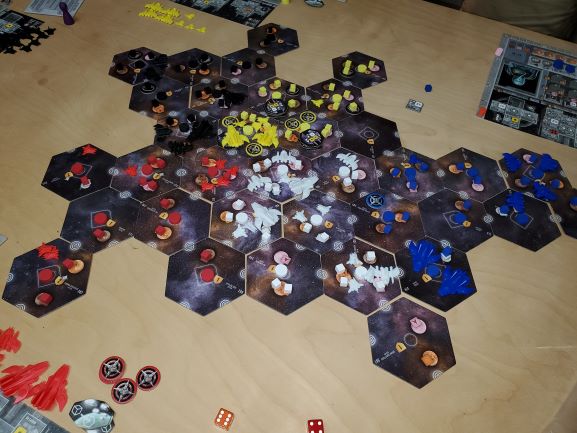